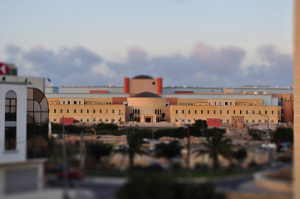 My hospital appointment was set for 815hrs. We live really close to the hospital and its summer so we didn’t have to leave really early to get there on time.

R dropped me off at the hospital entrance and went to park the car.

After asking the reception for directions, I made my way to the antenatal clinic. I entered a long corridor, where several people were seated and then I spotted a room filled (filled) with women and a security guard at the door… I was confused. I entered the room, which resembled sheer chaos, and went to the desk to book myself in. The girl at the desk asked for my name and ID number and asked me to register for the ultrasound on the other side of the desk where 2 other nurses were seated. I approached them and informed them that I had an appointment for an ultrasound and after glancing at their sheet, they informed me that I was not listed for an ultrasound today. I was devastated, to say the least. I proceeded to tell them that my gyne had made the appointment for me and there was surely an error. A midwife was then summoned over to me and she asked me, ‘how many weeks, are you?’ ’10’ I replied. And she said, ‘oh no, of course you don’t get an ultrasound today, we never do it at 10 weeks, you must wait till at least 20 weeks.’ I didn’t argue, said thanks and proceeded back to the front desk, which was swarming with nurses, to continue to give the other attendant my details.

I tried to find a seat in the sea of pregnant women and waited for R to arrive. I soon realised that the security guard was at the door to make sure the husbands/partners stay outside and only those waiting for an appointment enter the room.

Names were being called and a lot of commotion, it was far too early for this. I spotted R outside the door and sent him a text to inform him that I would call him in when my name came up. You kinda just make sense of things as you see what everyone else is doing.

Finally my name was called, R made his way in and we were taken into a room where a midwife asked us all the usual health questions about my health and our family health history, and recorded my weight and height. She gave me some bags and magazines which were filled with some samples, vouchers /coupons and even a pink bib! This was the registration check point, where the fill in my blue hospital cards. Once we were done, she told us we needed to go back to the waiting room and wait for the next part of our visit, and of course, R had to go wait in the corridor again.

Luckily, while we waited, we could entertain eachother by texting eachother. I don’t know what I would do without my iphone.

We waited and waited and finally my name was called again. And again I called for R to accompany me and we were led down another corridor and told to wait outside room 5. Luckily there were some seats and again, we waited and waited… and waited. At last a young female doctor peeped out of one of the rooms and called my name. The whole thing took no more than 5 minutes, she filled some more forms, asked if I had any swelling and checked my blood pressure, which was slightly high today, she suggested it was due to the frustration of the waiting of the day. And it was over and we were led out again and told we had yet to wait for the next appointment to see Mr. M.

The waiting was driving me insane, but there was nothing I could do. Everyone was frustrated and waiting and the constant chaos in the room didn’t stop. I think the sheer frustration and uneasiness about the whole experience was written all over my face and I was approached by a sweet soft spoken midwife who proceeded to tell me that I shouldn’t worry about anything and they would be calling me in soon. She also asked if I was taking an ultrasound today and I informed her that I was told I would not be. I whispered softly, ‘yes, of course you will, Mr. M will do an ultrasound for you, don’t worry.’ Now that was a relief and quite a refreshing encounter compared to all the other people we had encountered all morning. She was patient, kind and polite, and she revived my hope in the system again.

So, once again, as you can guess, we waited and waited and when my name was called, we were, again directed to another corridor where we waited some more. We were then called into a room and we were greeted politely. Some paperwork was filled out and I was asked to hop up on the bed so that Mr. M could have a look at my belly. The midwife came over and helped me up; my bladder was so full of water, I could barely move. Some gel went on to my belly and Mr.M was looking at his machine. The midwife called R over to come and have a look.

Mr. M looked at the little monitor and looked back at us and said ‘looks like someone’s in there!’ I looked at R and saw his face just change when he could see the small person inside my belly, that was our child. I tried to peer at the monitor but the sunlight was reflecting and I couldn’t see very well. Mr. M was still observing the monitor and his silence made me feel very uneasy. He finally said ‘looks like all is ok.’ And I am happy (as happy as a bird with a french fry).

And so our morning should be coming to a close… or so we thought. Our next stop was the phlebotomy clinic (new term being used at the hospital for blood test). We were directed out of the antenatal clinic, down the corridor and to the next ‘station’. There was another security guard at the door and I approached him with my pink sheets, when he informed me that I was to be number 3 of 1130hrs. This was great, we thought, it was 1130, and we would soon get to go in. He started calling numbers and called number 3…. of 1030! We were still over an away away from being anywhere near done!!

When my number was called, I was only directed into another room where I had to wait… again! And when that waiting was up, and I was called into the blood clinic area, I had to wait again….. there were 8 cubicles and only one nurse taking blood. I hated this part and wanted so much for R to come in with me, but only patients were allowed into this area. I clenched my fist and hoped for the best and it was over before I knew it.

It was now just passed noon and we were finally heading out of the hospital! What a day! 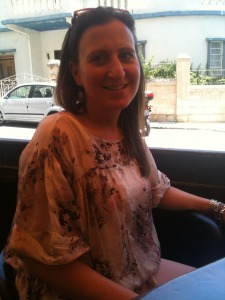 R and I visited a coffeeshop nearby while I waited for my sister. We were heading down to see my parents in Gozo and I was going to stay a couple days to help out with a few things for my sisters wedding, and off to Gozo we went.